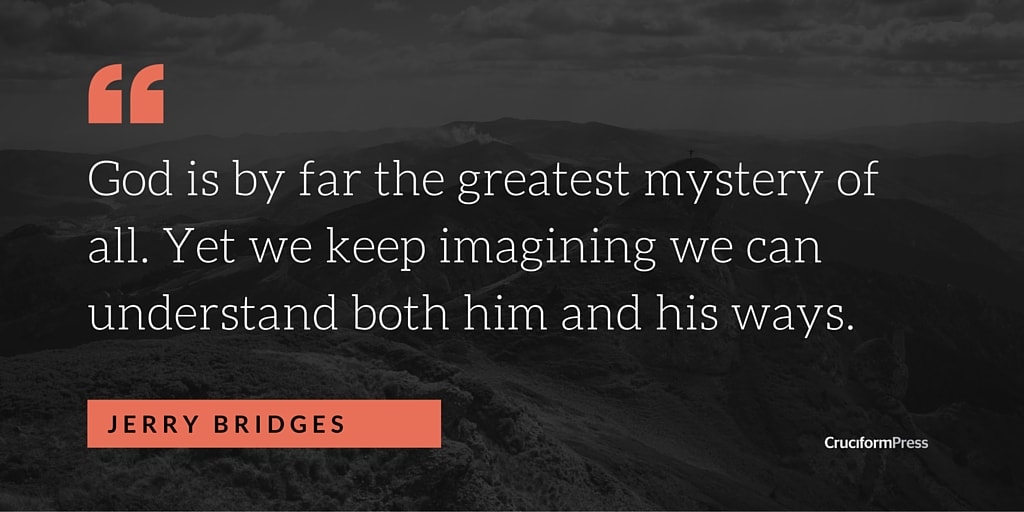 Read all the posts published to date in this 9-part series on God’s Providence from Cruciform’s good friend, the late Jerry Bridges. This was a teaching Jerry was presenting in the months leading up to his fatal heart attack in March, 2016.

Whenever we encounter a difficult episode in our lives we are inclined to want to ask God the question, Why? And when we do this, we seldom get even an inkling of an answer. Here are four reasons God’s providence is a mystery so much of the time.

The mystery of God’s providence is not surprising when we consider who God is. He is by far the most mysterious being in the universe. It would not be an overstatement to say he is infinitely mysterious. And yet, much about him—and his ways—is revealed in his Word. It is there we must look for answers.[tweet “We tend to look to secondary causes, not seeing that God is behind it all, in control of all.”]

At the end of the day, it’s probably best not to speculate about God’s motives in specific instances. And may we be careful never to “go beyond what is written” (1 Corinthians 4:6) but stay focused on clear, in-context interpretation of Scripture.

Jerry Bridges (1929-2016) was the author of Who Am I? — Identity in Christ, as well as numerous other books, including The Pursuit of Holiness (which has sold more than 1.4 million copies), and the award-winning The Discipline of Grace and I Will Follow You, O God. He maintained an international speaking ministry and, from 1955 until his death, served in a variety of capacities with the Navigators.

1 thought on “4 Reasons God’s Providence is a Mystery”