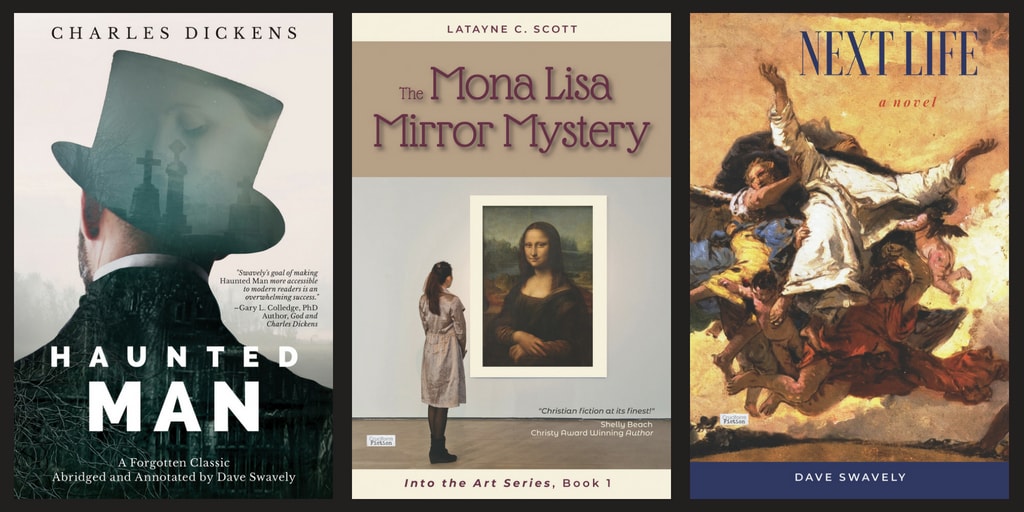 Today we are excited to announce the simultaneous release of our first three fiction titles. It so happens that these are all “speculative fiction”—like the novels of C. S. Lewis and Madeleine L’Engle—although future titles will include missionary stories, historical fiction, and more.

Please download a sampler with a lengthy excerpt from each book.

In two of the books we release today, characters travel to different worlds and times, and the other is a reality-rending ghost story by Charles Dickens—which is not A Christmas Carol but may be even better than that beloved tale.

SPECIAL INTRODUCTORY OFFER: Use coupon code FICTIONOFFER1 to get 30% off any or all of these three paperbacks.

Our first book is an edition of Charles Dickens’ Haunted Man, originally published in 1848. This version has been abridged significantly to make it more enjoyable for modern readers, while retaining every essential element of the story. It also includes an introduction with character descriptions and other helpful information, and a thought-provoking Afterword discussing some of the spiritual issues that are addressed in the book.

For any fiction fans who may happen to be unaware…Charles Dickens (1812-1870) is one of the most popular and respected authors in history. He wrote twenty novels and novellas, many short stories, a handful of plays, and several non-fiction books. His best-known works include A Christmas Carol, Oliver Twist, David Copperfield, and A Tale of Two Cities. He also was a professing Christian who included profound truth from the Scriptures in many of his books—and never more so than in Haunted Man.

In this story, a college professor named Redlaw is plagued by bad memories of a traumatic childhood, compounded by a terrible betrayal and loss during his young adulthood. When an ethereal demonic doppelganger of himself appears and offers to wipe away those memories, Redlaw eagerly accepts, and also receives the ability to spread this “gift” to others.

Featuring the breathless suspense, colorful characters, and witty humor that has made Dickens such a beloved author, the story also tackles some of the deepest philosophical and theological questions ever raised in his writings. His answer to “the problem of evil” is of both literary and theological interest.

Night at the Museum meets A Wrinkle in Time

Our second title is The Mona Lisa Mirror Mystery, by Latayne Scott, award-winning author of more than 25 books. The protagonist is a teenage girl, but this captivating and meaningful story will be a blessing to more than just young adults. Here’s a brief teaser for the book:

Addy’s three friends don’t know what to think when Addy tells them she “whooshed” right back into time and met a quirky Leonardo daVinci. Is it a dream? And what do the girls do when they have just as much drama in the present?

The Mona Lisa Mirror Mystery has already generated some pre-publication buzz among YA readers. Christy Award-winning author Shelly Beach calls it, “Christian fiction at its finest!” “I can’t wait to read the next one,” says Joy Capps, reviewer for HomeSchoolLiterature.com. And Celeste Green, Academic Dean at Oak Grove Classical Academy, says it’s “a book your teen won’t want to miss…I will recommend it over and over.”

One Christian’s adventure of a lifetime…in the Next Life!

Our third book is reminiscent of C. S. Lewis’s novel The Great Divorce, except this one reads more like an eyewitness account than an allegory.

It’s about an ex-pastor named Tim Carler, whose visit to heaven is so hard to believe that he has to call his story a novel to keep from being mercilessly mocked (or locked up for his own safety). But ironically, his account rings true in a way that other “heaven tourism” books do not. Unlike those supposedly non-fiction books, there’s nothing in this one that contradicts Scripture.

After the shock of finding his soul in the Intermediate State, the surprises multiply as Tim finds out who’s there, who’s not, and how different this heaven is from our common conceptions. In a dimension not bound by time, he is sent on missions into the past where he meets some extraordinary everyday people, as well as famous ones like the Jewish Patriarchs, Adolf Hitler, and two Victorian Charleses—Spurgeon and Dickens.

Speaking of Dickens, this novel is also reminiscent of A Christmas Carol, but with more gospel content. It’s a Pilgrim’s Progress where the journey takes place in the life to come rather than in this one. Modern comparisons could be made to The Shack (with much better theology) and Alan Moore’s graphic novel From Hell (except it’s from heaven).

Next Life is an utterly unique mind- and genre-bending book that will make you look at life in heaven, and on earth, in a whole new way, and look forward to both like never before.

Novellas: A Great Idea Whose Time Has Come

One of the things that’s made Cruciform Press unusual is that nearly all our books are quite short. We’re hoping that we can be one of the first publishers to ride a new wave of interest in shorter fiction as well. For more about what makes novellas so great, see my recent article. But regardless of their length, what’s most important about these books are the enjoyable and meaningful stories they tell, and we can’t wait to unveil them to you!