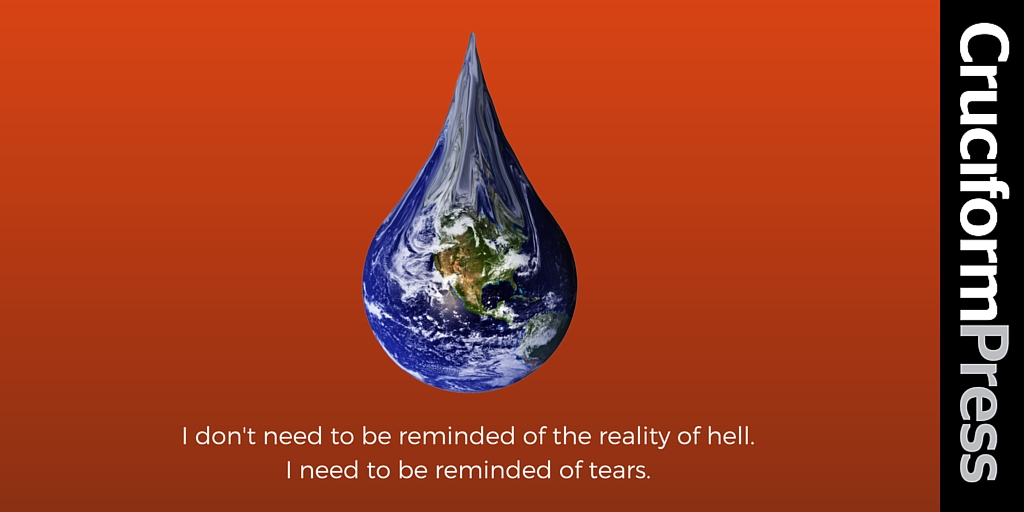 I’m going out on a limb here, but I would bet (if only there were a biblical precedent) that the readership of this site doesn’t need to be convinced that eternal damnation is a longstanding biblical doctrine, that there will be a separation of the sheep and the goats, and that people who don’t repent and believe will suffer a Christ-less eternity. But if a preacher is truly convinced of the reality of hell, how should that affect his preaching? How should that affect the tone of our witness as Christians?

If there were evangelical action figures (and there probably are—I just haven’t been to my local Christian bookstore lately), I would have a 12-inch-tall Martyn Lloyd-Jones displayed on my bookshelf, wooden pulpit to scale included, robes sold separately. Plastered on the wall in front of my desk is the next best thing, though, a customized Fathead filled with MLJ quotes, one of which says: “The apostle Paul tells us himself that he preached with tears.” Lloyd-Jones believed in the urgency of preaching because hell is real. “Nothing can be so terribly urgent,” he reminds us. Or at least he reminds me every day of the week, because there it is—right in the middle of that Fathead poster!

It’s not that I need to be reminded of the reality of hell. I need to be reminded of tears. But I don’t come from a family of huggers. We’re Germanic. We might salute each other, but we’re not about to hug. I’ve never seen anyone from my dad’s side of the family cry, and we’ve attended funerals together. My relatives are more apt to bean bunnies over the head with shovels than wiggle their noses at them.

Is that an excuse though? Are tears cultural? (“They’re weepers, you know. They’re huggers.”) Is it okay if white Reformed preachers never weep publicly from the pulpit? Is it always simply emotionalism when preachers emote? If the two great cares of a preacher’s soul are the glory of God and the good of fellow sentient beings, then we should weep from the pulpit sometimes. If I never preach with tears, then I’m not preaching biblically. Or is that too much of a stretch?

Paul said that he “did not cease night or day to admonish everyone with tears” (Acts 20:31). Sure, it made Thanksgiving dinner a little uncomfortable, but there you have it. When he saw people denying the one who gives them everything, a people who worshiped everything except the one from whom everything comes, he grieved. So should we.

The other fact that should provoke our emotion is that souls will be lost forever, something God himself does not take delight in (Ez. 18:23). What an emotional burden to enter a pulpit with! There is no place in your sermon notes where you can write, “Cry here.” You can’t force tears. (And if you can, then you’re in the wrong business. Get an agent.) But if Paul admonished everyone with tears, shouldn’t I at least admonish a few with tears? People are bound for hell. Does that smack of emotionalism? Luke tells us in Acts that Paul served “the Lord with all humility and with tears.” And he never added, “But he was very emotional, you know.”

We cannot preach on God’s judgment without some deep sense of grief. Well, we can, but we shouldn’t. This is why hellfire and brimstone preaching developed a bad reputation—lack of tears. If we lack a deep sense of heartbreak when speaking about hell, we will sound callous.

[tweet “When we see people denying the one who gives them everything, we should grieve.”]

Recently, I learned about a dear family member who has gone from model homeschool child to 20-something on the far end of an anti-God worldview that confuses every category of life. It’s been a tragic journey to witness. So when I walked the congregation through Paul’s progression of where idolatry leads in Romans 1, I had a lump in my throat. Up close and personal, I know a real flesh-and-bones loved one lost to this progression. “For many, of whom I have often told you and now tell you even with tears, walk as enemies of the cross of Christ” (Phil. 3:18). I didn’t have to share the details of the story, but the Scripture drew out the emotional core of the tragedy in my voice. I wish I could say that this response was my emotional core when speaking of judgment more often. There’s something else to weep over—my own personal failures when it comes to caring. I’m a long way from Paul’s emotional history.

[tweet “The gospel is our motivation to care – even to the point of tears.”]

All I’m suggesting here is that when someone preaches on such a weighty subject as the perdition of human beings, there are appropriate emotional qualities that should accompany the effort. When it comes to hell, our voices should crack.

Thor Ramsey is author of The Most Encouraging Book on Hell EVER. He is a Christian, husband, father, pastor, author, speaker, vertebrate, biped, and stand-up comic, in that order. This post originally ran at The Gospel Coalition.