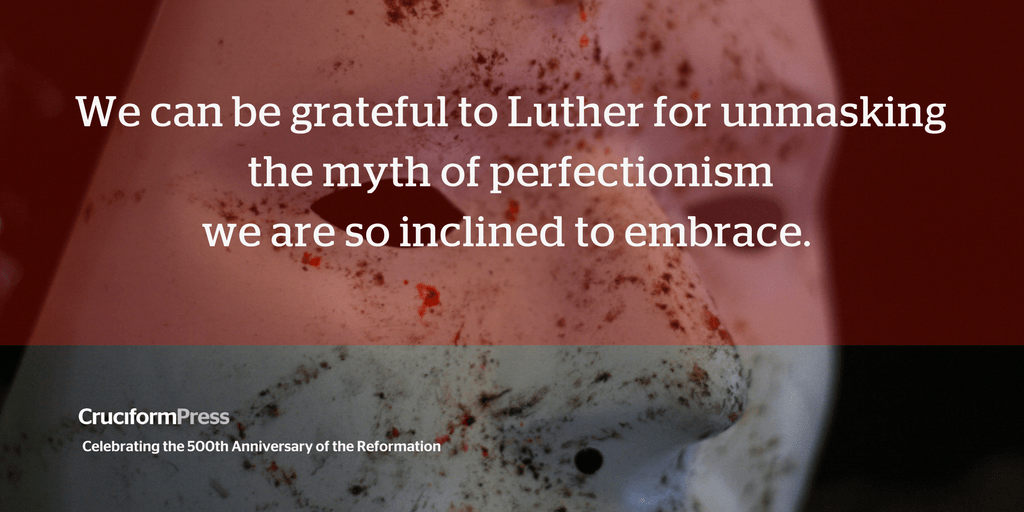 LUTHER’S UNDERSTANDING OF THE GOSPEL, Part 7

(Today’s post picks up directly from the previous one.)

The Myth of Perfectionism

Another Princeton professor, Benjamin Breckenridge Warfield, wrote hundreds of pages confronting the errors of perfectionism and the idea that saints no longer are sinners. In his essay on “Miserable-Sinner Christianity” (article one), Warfield did a masterful job of showing how throughout Protestant history and across all denominations and confessions, the Protestant church has always held to Luther’s doctrine that the believer is at the same time sinful and justified.

It belongs to the very essence of the type of Christianity propagated by the Reformation that the believer should feel himself continuously unworthy of the grace by which he lives… We must always be accepted for Christ’s sake, or we cannot ever be accepted at all. This is not true of us only “when we believe.” It is just as true after we have believed. It will continue to be true as long as we live. Our need of Christ does not cease with our believing; nor does the nature of our relation to him or to God through him ever alter, no matter what our attainments in Christian graces or our achievements in Christian behavior may be. It is always on his “blood and righteousness” alone that we rest.[i]

In referring to the joy that “miserable-sinner Christianity” produces, Warfield noted:

The spirit of this Christianity is a spirit of penitent indeed, but overmastering exultation. The attitude of the “miserable sinner” is not only not one of despair; it is not even one of depression; and not even one of hesitation or doubt; hope is too weak of a word to apply to it. It is an attitude of exultant joy. Only this joy has its ground not in ourselves but in our Savior.[ii]

In our own time, noted author Jerry Bridges has often written of the believer’s constant need to remember the gospel. We are often accused by the devil and wonder if we are God’s child or if God will still love and accept us when we have sinned so deeply. Bridges notes, “The truly godly person never forgets that he was at one time an object of God’s holy and just wrath. He never forgets that Christ Jesus came into the world to save sinners, and he feels, along with Paul, that he is himself the worst of sinners.”[iii] Bridges continues:

If God’s love for us is to be a solid foundation stone of devotion, we must realize that his love is entirely of grace, that it rests completely upon the work of Jesus Christ and flows to us through our union with him. Because of this basis his love can never change, regardless of what we do. In our daily experience, we have all sorts of spiritual ups and downs—sin, failure, discouragement, all of which tend to make us question God’s love. That is because we keep thinking that God’s love is somehow conditional. We are afraid to believe his love is based entirely upon the finished work of Christ for us.[iv]

These quotes addressing the myth of perfectionism and the reality of indwelling sin in the believer’s life help us see that Luther’s simul iustus et peccator has been understood and believed across the centuries in many denominations. It is not just a Lutheran idea, but one that many different denominations have seen arise from the Scriptures themselves.

Read all the posts published to date in this extended series on the life and theology of Martin Luther, as we celebrate the 500th Anniversary of the birth of the Reformation.

The faith of medieval and Renaissance times was a religion of fear and uncertainty, but Luther’s understanding of the gospel crashed into this world with joy and assurance. The truth of justification by faith alone, buttressed by the law/gospel distinction, a recovery of correct definitions of repentance and faith, the admission of man’s bound will, and the humble acknowledgment of sin in the believer’s life brought immeasurable joy and confidence to Luther’s tormented conscience and freed him to genuinely love and worship God for the first time.

While there are many branches of the Protestant faith today, all Protestantism has at its beginning Luther’s doctrine of justification by faith alone and its centrality to the entire Christian life and the Church. The Dutch theologian Herman Bavinck noted, “there is no essential difference on the doctrine of justification between the Lutheran and the Reformed theology.”[v] Elsewhere, Bavinck summarized Luther’s impact: “He again grasped the gospel as a glorious message of grace and forgiveness and brought religion back into religion. As a result he has proven fruitful for the whole theological and dogmatic enterprise.”[vi]

Indeed, an entire book could be written on how the Protestant faith in its varied branches have treasured the gospel as Luther taught it.

On the other hand, while we may not bow to the bones of saints or fear purgatory, in many places Protestantism in our day has fallen into the same ambiguity and confusion about the gospel that existed in medieval Christianity. We have blurred the distinction between the law and the gospel and have lost the doctrine of justification. We have forgotten Christ for us and have sought peace in Christ’s subjective work in us. We have gloried in our own decision to become a Christian. In the air that we breathe are subtle forms of perfectionism that will not allow us to admit our sin and ongoing need for forgiveness and the finished work of Christ; we have forgotten the truth of simul iustus et peccator. Returning to the biblical gospel that Luther recovered is the critical need of our day. Such a return will cause us to give glory to God.

With thee is naught but untold grace
Evermore forgiving.
We cannot stand before thy face,
Not by the best of living.
No man boasting may draw near.
All the living stand in fear.
Thy grace alone can save them.

Therefore in God I place my trust,
My own claim denying.
Believe in him alone I must,
On his sole grace relying.
He pledged to me his plighted word.
My comfort is in what I heard.
There will I hold forever.[viii]

Part 16 of an extended series drawn from A World Upside Down: The Life and Theology of Martin Luther, by Charles E. Fry.

Chuck Fry holds degrees from Marshall University, Moody Bible Institute, and Christ College. He has been in discipleship ministry since 1989 and is on staff with The Navigators in Huntington, West Virginia. He and his wife, Lisa, organize and host the annual Majesty of God conference, held each April.

[i] Benjamin Breckenridge Warfield, “Miserable-Sinner Christianity” in the Hands of the Rationalists, Article 1, found in, The Works of Benjamin B. Warfield, volume 7 (Grand Rapids: Baker, 1932, 2003), 113.

[vii] The Wesleys were not always consistent with their understanding of justification they learned from Luther’s commentaries at the beginning of their Christian life. Yet God used Luther to bring them to trust Christ alone for salvation.